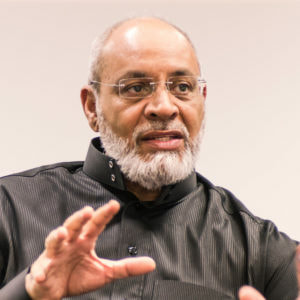 Dr. Muneer Fareed is a respected scholar and thought-leader of the Muslim community in North America. He is currently a member of the Fiqh Council of North America, the premier Islamic legal authority in the United States and Canada.  Dr. Fareed is a co-founder, Core Scholar, and member of the Board of Trustees of the American Learning Institute for Muslims (ALIM), an academic institution where scholars, professionals, activists, artists, writers, and community leaders come together to develop strategies for the future of Islam in the modern world.

Dr. Fareed also serves as part of the Board of Advisers to the Institute for Social Policy and Understanding (ISPU), a leading nonprofit research organization committed to studying and analyzing U.S. domestic and foreign policy. ISPU’s research aims to increase understanding of key policy issues that impact communities in North American and the Muslim World.

Previously, Dr. Fareed has served as the Secretary General of the Islamic Society of North America (ISNA), Associate Professor of Islamic and Middle Eastern Studies at Wayne State University (Detroit, MI), and scholar-in-residence for the Islamic Association of Greater Detroit.